Are you paranoid someone is watching the content you store in the cloud? You might be onto something. Google accidentally shared archives of some people’s videos with other Photos users for a brief period of time last year.

Yesterday, the company began alerting users that a “technical issue” in Google Takeout — an app that lets you download backups of your data from other Google software — caused videos stored in Photos to be “incorrectly exported” to other people’s archives, 9to5Google reports.

For the record, the Big G insists the issue solely affected users requesting Takeout exports between November 21 and 25 last year. Pretty gnarly. On the bright side, the issue has since been resolved. 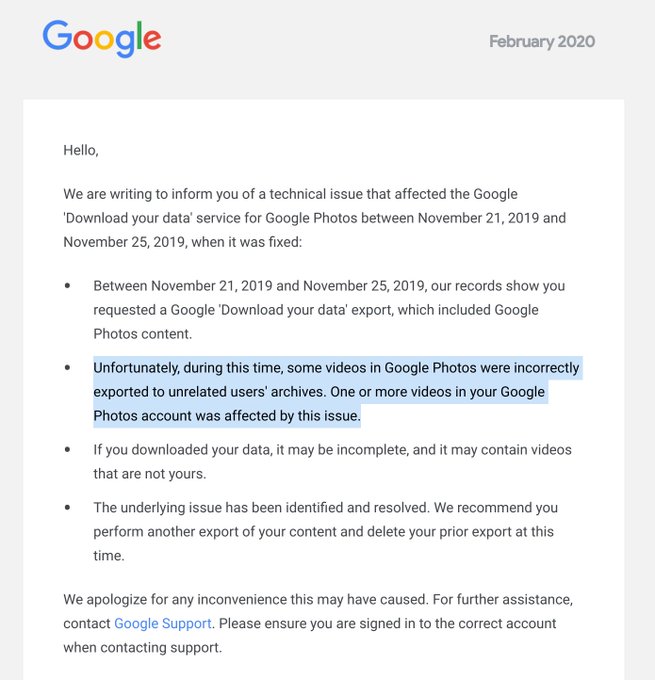 The extent of the bug remains unclear. “One or more videos in your Google Photos account was affected by this issue,” reads a boilerplate notice sent to affected users.

The company is now asking users to delete any archives they might’ve downloaded between November 21 and 25, and perform another export. The notice further suggests archives downloaded during this timeframe may be incomplete, or contain other people’s content.

Google says the glitch affected only 0.01 percent of users requesting a Takeout. The number is vague, but, for reference, Photos has over a billion installs on Android alone, which means there’s likely plenty of affected users.

“We are notifying people about a bug that may have affected users who used Google Takeout to export their Google Photos content between November 21 and November 25,” a company spokesperson told 9to5Google. “These users may have received either an incomplete archive, or videos — not photos — that were not theirs.”

“We fixed the underlying issue and have conducted an in-depth analysis to help prevent this from ever happening again,” the statement further read. “We are very sorry this happened.”

So are we, Google, so are we. Anyways, I guess this is yet another reminder to keep your risqué pics and clips off the cloud.